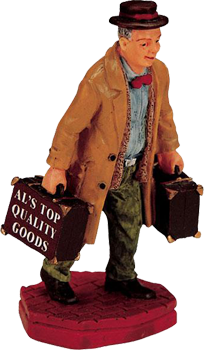 A Traveling Salesman is an older character type that sometimes overlaps with the Snake Oil Salesman. Typically, the traveling salesman is well-dressed and has some aspects of the Intrepid Merchant to his character, or he may be more of an Honest John-type of fellow.

As the numerous jokes linking his type to the Farmer's Daughter suggest, he might be a somewhat lecherous character, because being always on the move isn't conducive to carrying on lasting relationships.

A British term for the profession is a "busman", and this is the origin of the term Busman's Holiday. Not to be confused with Travelling Salesman Montage.

. Compare Knocking on Heathens' Door for the religious variant.

Truth in Television if you're familiar with the concept of food trucks, door-to-door salesmen, or farmer's markets.

Lucy tries to unload a vaccuum cleaner she bought from a high-pressure salesman.

Lucy tries to unload a vaccuum cleaner she bought from a high-pressure salesman.