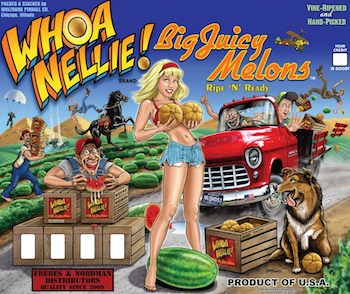 Want some?
"Who don't like big juicy melons?"
— Hellen
Advertisement:

Instead of a modern game, Melons is an electro-mechanical table that was made by reusing the components of a 1957 Gottlieb Continental Cafe on an all-new playfield, wrapped up with new art and current lighting and imaging techniques in an original theme. Three other machines were similarly made using a modular solid state system called "PinKit", and the result is a retro throwback that remains true to the integrity of the electro-mechanical era while weaving in modern sensibilities.

The game was publicly unveiled at Pinball Expo 2011, and all four tables were quickly sold for a hefty price. Some die-hard fans have since taken to creating their own tables, with Greg Freres sharing the cabinet art and Classic Playfields

In October 2014, Stern Pinball announced an agreement with WhizBang to mass-produce Whoa Nellie! tables, using a blend of electro-mechanical and solid-state components such as mechanical score reels, real bells, a digital soundtrack, and modern serviceability features while retaining the original's look and feel. The tables were released in early 2015 for $6,500 each.

Whoa Nellie! Check out these tropes!

"Nice action! And the melons ain't bad either."