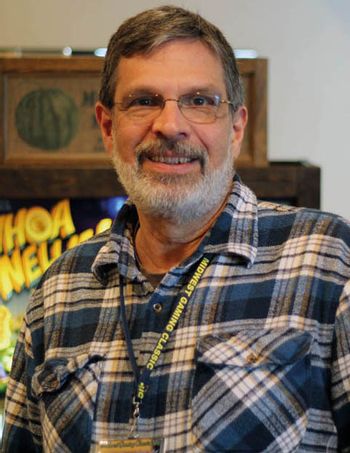 Dennis Nordman is a longtime designer of arcade pinball games with over twenty years of experience in the field.
Advertisement:

Unlike some other pinball luminaries, Dennis Nordman fell into the industry almost by accident. After his divorce in The '80s, Nordman returned to college and majored in Product Design, where his senior project was to redesign the contemporary pinball cabinet. He received an "A" for his tapered, modernized prototype, but soon injured his back; during his recovery, Nordman built a full-size version of the cabinet in an attempt to get hired by a pinball company. After a presentation at Bally, he was hired as a cabinet designer.

His attempts to modernize pinball cabinets (as seen in Rapid Fire, Centaur II, and Mr. & Mrs. Pac-Man Pinball) didn't catch on; Nordman was laid off within a year, but got a job almost immediately afterwards with Gottlieb to create video games. He developed an early example of a Rhythm Game, only to get laid off again during a buyout by the Coca-Cola Company. During unemployment, he designed a pinball game based on Rambo along with a promotional poster; he was rehired by Bally after they saw it, and the game became Special Force.

Nordman subsequently created a memorable series of games for both Bally and Williams Electronics, such as Blackwater 100, Elvira and the Party Monsters , Dr. Dude, White Water, Demolition Man, Indianapolis 500 and Scared Stiff. After leaving Williams in 1996, he went on to design slot machine bonus systems and redemption games. He joined Stern Pinball in 2005, only to be let go three years later when the company underwent massive layoffs.

Since then, he has been working semi-independently, forming WhizBang Pinball with with longtime collaborator Greg Freres in 2009, as well as developing games for Jersey Jack Pinball, Heighway Pinball, and Multimorphic.

He is a fan of motocross and dirt bike racing, and creates custom dollhouses and miniatures in his free time.

Tropes associated with Dennis Nordman and his games include: