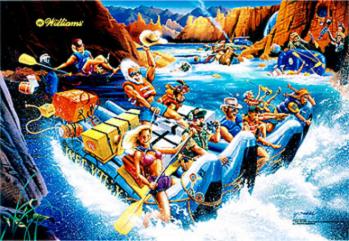 White Water is a 1993 pinball machine by Williams Electronics, designed by Dennis Nordman with artwork by John Youssi. It's based around white-water rafting — navigating around boulders, exploring river caverns, and plunging over waterfalls. It has a variety of modes to compliment this, like distracting Bigfoot to sneak inside his cave, getting a gold rush, and surviving the Whirlpool Challenge. The ultimate goal is to visit hazards in order to advance your raft down the river and reach Wet Willie's River Ranch, which in turn lets you complete Wet Willie's mode.

White Water was formerly available for The Pinball Arcade until the license for the Williams and Bally tables expired on July 1, 2018. Another digital version was released for Pinball FX3 as part of Volume 4 of its Williams Collection.

A sequel, Yukon Yeti, was announced by deeproot Pinball in 2020

. According to the slide presented

◊, it is set during the Klondike Gold Rush of the 1890s. Nordman and Robert Mueller are set to design the machine.

Go With The Flow!