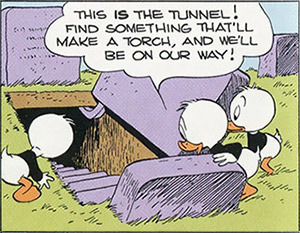 Don't worry, there's only about a 50% chance of finding some sealed away horror down there.
"Not more than one secret room or passage is allowable, and such a passage may only be in a house or building for which it is appropriate by age or purpose."
— Father Ronald Knox, "Ten Commandments"
Advertisement:

Often discovered by a snooping hero, the Secret Underground Passage is a popular trope in mystery and adventure-themed works. They are often a secret way of going from point A to point B without being detected, usually built into houses or castles. If bad guys built it, then the Secret Underground Passage is often used as a place to smuggle things and stash loot, or hide prisoners. If good guys built it, it's often a place to escape persecution, sneak past danger, or hide something important they don't want the bad guys to find.

This is sometimes discovered when the hero notices strange sounds - often human voices - and tries to find their source. Other times, it's discovered simply by accident when poking around, or even just leaning on the correct bookshelf and conveniently revealing the hidden passageway.

Sometimes the Secret Underground Passage is not just a single passage, but links to a huge network of tunnels under the ground.

open/close all folders
Anime & Manga
Board Games
Advertisement:
Comic Books
Films — Animation
Films — Live-Action
Literature
In The Secret Life of Kitty Granger, the Orchestra suspect that Nazi sympathizer Henry Lowell has a Secret Room in his estate where he and his cronies make their plans. Kitty and Verity are sent undercover to look for it. Sure enough, Kitty finds a hidden door in the wine cellar that leads into a passageway that leads to a chamber where Lowell, Smythe, and their friends plot their False Flag Operation and their takeover of the British government.
Live-Action TV
Pinballs
Video Games
Web Comics
Web Original
Western Animation
Real Life