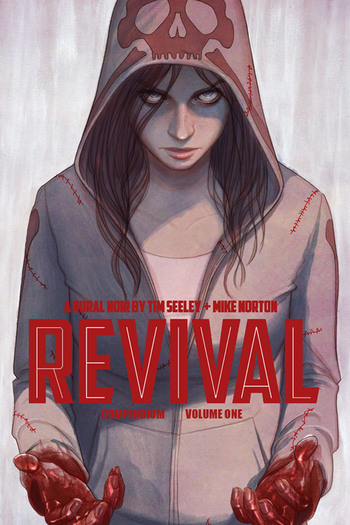 In Rothschild, Wisconsin, a small town surrounded by farms, people die sometimes. One day some of them come right back to life, just as if nothing had ever happened.
Advertisement:

Some people handle it better than others.

Dana Cypress, a divorcee with a young son, is an officer in the Rothschild police department, and she's put in charge of policing the "Revivers," right as their existence is becoming national news. Now she gets to deal with the crimes that follow from the phenomenon, the media circus that erupts around it, and a series of increasingly violent murders committed by the revivers themselves.

Revival is a "rural noir" comic book published by Image Comics, written by Tim (Hack/Slash) Seeley and drawn by Mike Norton. It ran for 47 issues, from 2012 to 2017, as well as one crossover issue with Chew.