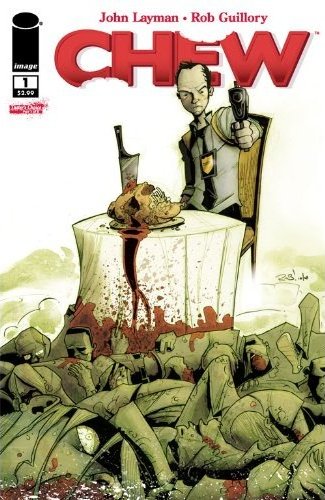 "Meet Tony Chu. Tony Chu is almost always hungry, and almost never eats. Here's why:
Tony Chu is cibopathic. That means he can take a bite of an apple, and get a feeling in his head about what tree it grew from, what pesticides were used on the crop, and when it was harvested.
Or he could eat a hamburger, and flash onto something else entirely.
Strangely enough, the only food Tony Chu can eat and not get a psychic sensation from is beets. Consquently, Tony Chu eats a lot of beets."
— from Issue 1
Advertisement:

Chew is a comic book series by John Layman and Rob Guillory and published by Image Comics.

In a World… where the bird flu killed millionsnote or is it all a government conspiracy? and chicken has been outlawed, Tony Chu is a Philly cop struggling with the strange gift of cibopathy. When he is forced to work for the Food and Drug Administration (the most powerful government agency), he is partnered with a fellow cibopath, Agent Mason Savoy, in the Special Crimes Division. Together, they use their strange (and disgusting) ability to solve chicken and other food-related crimes, but after Savoy betrays the FDA, Chu is partnered with John Colby, his old police partner who was turned into a cyborg after being injured on the job. The rest of the series follows Chu and his family as they gets drawn into the conspiracy surrounding the killer bird flu, as well as Chu's attempts to hunt down a killer Cibopath known as the Collector.

Chew is notable for having an ordinary (well, aside from the cibopathy) Asian-American for a protagonist, which is pretty rare in Western fiction. He doesn't even know kung fu.

The comic is 60 issues long, divided into 5-issue arcs with the series ending on November 23, 2016, with a double sized Distant Finale. Specials include:

Not to be confused with The Chew, an ABC clone of The View that focuses on food.