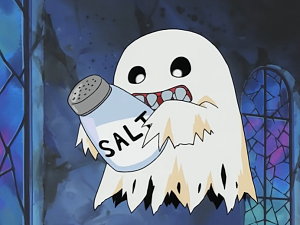 For all your human-sacrificing needs!
"I want salt over here, as much as you can find! Everyone with a sword wipes their blades in the salt! ...SALT KILLS DEMONS! Don't forget. Spread the word!"
— Trevor Belmont, Castlevania (2017)
Advertisement:

Sodium Chloride. Whether it comes from the earth or the sea, it is already the solution to many of life's problems. It is necessary nutrient to prevent electrolyte deficiency and dehydration, especially in hot climate. Its ability to absorb water makes it lethal or repellent to many pests. It can preserve or pickle food, protecting it from time and decay. And, of course, it enhances flavor to turn bland meals delicious. Because it is so useful, it can be valuable: before the industrial age, salt could be worth its weight in gold. Many cultures came to revere salt as a wonderful substance with purifying properties.

In fiction, this may be taken a step further: salt can have near-divine power; it can be a weapon against evil and the solution to supernatural problems. This trope applies wherever salt is the downfall of a villain, even if indirectly.

Salt can cause pain, as demonstrated by the experience of "rubbing salt in the wound", or by the way it kills pests like worms or slugs on contact. This, combined with the idea that Holy Burns Evil, might inspire this trope.

This idea appears in myth and folklore around the world: salt is said to be an effective weapon or repellent against The Corruption, Demons, The Fair Folk, The Undead, Vampires and more. Overlaps with Supernatural Repellent in this case.

Super-Trope of Salt the Earth. Not to be confused with any salt dissolved in a liquid solvent, although this trope may involve this.

The sprites' flesh dissolves upon contact with salt, allowing Ellie to fight back against them by using salty foods as weapons.

The sprites' flesh dissolves upon contact with salt, allowing Ellie to fight back against them by using salty foods as weapons.