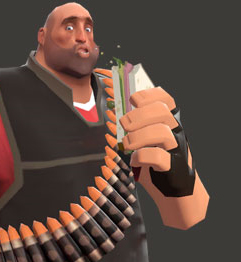 A Large Ham needs a large ham sandvich!
"The mark of a successful sandwich is not being able to hold it with one hand."
— Tomodachi Life, description for the Sandwich food item
Advertisement:

Tastes great, better filling! Sandwiches of one kind or another have been the Trademark Favorite Foods of many characters.

Occasionally characters may comment on its simplicity, use wacky ingredients, or overstuff their sandwiches, but it's all the same basic food item.

Also see Dagwood Sandwich. See also Inherently Funny Words, Wasteful Wishing, as a common part of that trope is the character wishing for a sandwich. When provided as a health item or powerup in video games, see Hyperactive Metabolism and Power-Up Food.

And, last but not least, see They Wasted a Perfectly Good Sandwich if they weren't able to finish the sandwich, or any other food, for whatever reason.

Elmer Fudd enjoys his grilled cheese sandwich so much, to the point of turning away all other food.

Elmer Fudd enjoys his grilled cheese sandwich so much, to the point of turning away all other food.