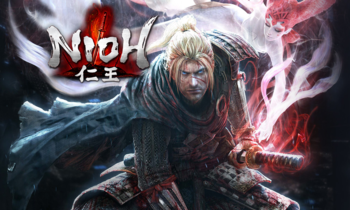 Ready to die?
Death is an entry to life.
You will be reborn.
In tears, in water.
Life and death form a circle.
You can die and be reborn as long as I exist.
You are free from death.
— Excerpt from E3 2016 trailer
Advertisement:

Nioh (from 仁王 - "two Deva kings", a pair of divine protectors of Buddhist temples), formerly known as Ni-Oh, is a 2017 Hack and Slash Action RPG for the Sony PlayStation 4 and PC developed by Team Ninja (makers of Dead or Alive and Ninja Gaiden) and published by Sony Interactive Entertainment worldwide for the PlayStation 4 and Koei Tecmo in Japan for the PS4 and worldwide on PC. Loosely based on an unfinished Akira Kurosawa screenplay and set in the Sengoku period of 16th century Japan, players take on the role of an Irish-born English samurai named William Adams as he combats against human and supernatural foes from Japanese folklore, such as Oni.

Gameplay is inspired by Dark Souls, wherein an average Mook can kill a gear-appropriate player in less than four hits, players must learn to spot enemy tells and draw out opponents one at a time, else risk a swift defeat from numerous foes, while stronger ones like oni and bosses can easily One-Hit Kill players. Unlike Dark Souls, Nioh has several things that set it apart. For starters, it features a set protagonist in William Adams (the Real Life "First English Samurai"), thus limiting Character Customization to accessories, armor and weapons like traditional Eastern RPGs. Speaking of, Nioh places heavy emphasis on gear, as the game uses a loot-based equipment system to bestow the player with improved stats and abilities. While the combat system is similar to its inspirations on a surface level, Nioh features numerous quirks that make it unique, such as Ki Pulsing, Living Weapons, Ninjutsu, Onmyo Magic, five weapon types (with two more added in the DLC) that have their own movelists a la a Hack and Slash game, and a Stance System. With a pace as fast as Bloodborne, the game is similarly completely merciless to the unprepared.

Notably, Nioh has an unquestionably long development cycle, having been announced since 2004, making this one of the longest Japanese-developed games. Nioh was released worldwide on Feburary 7, 2017 for the PlayStation 4. A PC version was later announced in October of that same year for release on November 7.

also revealed that the game is a Prequel, featuring Toyotomi Hideyoshi in his youth (including his time when he was known as Kinoshita Tokichiro) during his service under the younger Oda Nobunaga. It was released world wide on March 13th, 2020. A Playstation 5 version, as part of a collection with Nioh 2, was released on February 5th, 2021, with 120 FPS support.

A large and very strange looking yokai that inhabits ocean waters. Also known as "umi-nyudo" and "umi-hoshi". A famed yokai of many legends; it takes its name, which literally means "sea-monk", from its round, bald head. Its appearances inevitably herald violent storms.

A large and very strange looking yokai that inhabits ocean waters. Also known as "umi-nyudo" and "umi-hoshi". A famed yokai of many legends; it takes its name, which literally means "sea-monk", from its round, bald head. Its appearances inevitably herald violent storms.