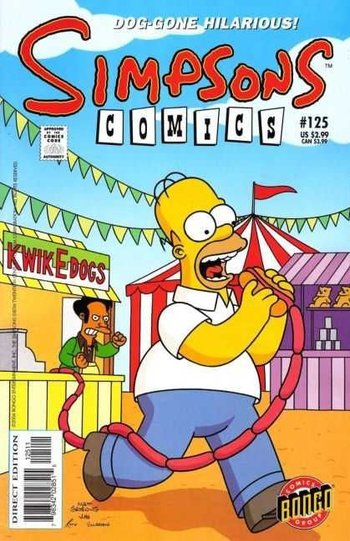 In many animations and comics, but sometimes in live action as well, hot dogs are sold in "strings", convenient for playing for comedy. Realistically, these sausages would be raw if they're still strung together, but characters frequently treat them as if they're cooked—making it clear that this trope operates by the Rule of Funny. The most common of these gags involves a dog at a picnic grabbing one frank and running off with the whole string (and consequently, the lunch from several people). Another example might be a team of Strong Ants hauling the franks away like a train.

Link sausages sold in strings are rarely seen as such anymore, at least in the USA, since there are far fewer butcher shops than there used to be. Most folks seem to buy their hot dogs/frankfurters/wieners/sausages in supermarkets, in sealed plastic packages with that gooey liquid (and, annoyingly, in packs of ten while the buns usually come in packs of eight). Still, most people seem to recognize the sausage strings enough to appreciate the gags. note British outlets, even supermarkets, still tend to sell sausages in linked strings; although in quantities of eight or ten and sealed into an outer wrap. There are still many regular butchers' shops who will sell you sausages in a string and these can be bought "loose" with minimal outer packaging. And in the Spanish (and Portuguese)-speaking world, you can find many varieties of sausage that almost always come in strings like these. This is a by-product of manufacture: sausage-making extrudes the meat mix into a continuous hollow tube of outer skin, and the "string" is created by twisting the filled tube at regular intervals.

A common variation is that a character uses the sausages as a Delicious Distraction when facing an Angry Guard Dog.