Series / Phil of the Future 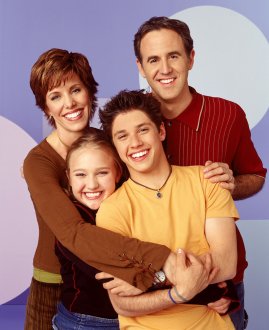 Phil of the Future is a Disney Channel Kid Com which aired from 2004 to 2006. It followed the Diffy family — Barbara, Lloyd, Phil, and Pim — who are your average 22nd century family. Which is a lot like your normal Nuclear Family, except with aliens. During their vacation through time, their time machine breaks down in the present day. The family must rough it out in the 21st century while trying to get back home — all the while not telling anyone that they're from the future. (Well, anyone except Keely Teslow, Phil's 21st century love interest.)

Kickstarted the career of Alyson Michalka (who played Keely), who eventually formed Aly & A.J. with her younger sister A.J. This was the last Disney Channel Original Series that wasn't produced by It's a Laugh Productions and thus being filmed in a single-camera format and lacking a Laugh Track until Stuck in the Middle premiered in 2016, which almost certainly explains why it was cancelled after a mere 43 episodes, in favor of all the other shows that were.