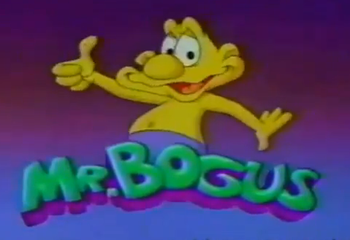 Mr. Bogus was an animated Saturday morning series that aired in the US in 1991. It is based on a series of Belgian Claymation-animated shorts featuring the titular character. These shorts serve as tie-ins to commercial breaks or returns from commercial breaks.

The series followed the adventures and misadventures of the eponymous character, Bogus, a tiny yellow-skinned gremlin who lives in the house of Tommy Anybody, a young boy who lives in a suburban neighborhood. Besides his adventures in Tommy's house, Bogus also went on various adventures in his native homeland called Bogusland, in which he came from by use of a bathroom mirror. During these adventures, Bogus was also occasionally joined up by his bratty younger cousin, appropriately named Brattus. Throughout the series, Bogus is best known for his clumsiness, his humongous appetite, and his penchant for doing good deeds.

The series was created by Calico Entertainment and Zodiac Entertainment, the same two companies that created Widget the World Watcher and Twinkle the Dream Being.