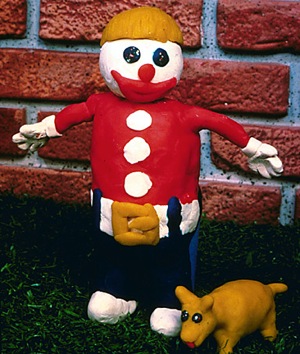 Guess what happens in the next few minutes?

The Mr. Bill series is proof that we enjoy the misfortune of others.

Mr. Bill was a character who started off on Saturday Night Live in 1976 as a result of a prompt by SNL to send in home movies. Created by Walter Williams, 'The Mr. Bill Show' was a parody of bad animation and children's shows in general. Mr. Bill (voiced by Williams) was a little Play-Doh clown who would start the show wanting to entertain the kids until things would ultimately take a violent turn with the 'help' of Mr. Hands (originally Vance DeGeneres; yes, Ellen's brother), a set of talking hands who manipulated everything on screen, and Sluggo, the silent antagonist who Mr. Bill would always fear was "going to be mean to me'

Every episode would end with Mr. Bill and his dog Spot horribly mutilated, crushed, maimed, or in some other way destroyed, only to come back next episode to do it all over again.

Williams was hired to be a writer on SNL in 1978, and the shorts became a regular part of SNL's fourth and fifth seasons. After leaving SNL in 1980, Mr. Bill returned thrice in the next two seasons, including the sixth season finale's cold open, before moving to Los Angeles in a short film in October 1981. Mr. Bill would subsequently appear frequently on the 1980s USA Network variety series Night Flight, and in the ill-fated 1986 Showcase pilot-turned-TV movie Mr. Bill's Real Life Adventures.

In the 1990s, Mr. Bill resurfaced on the short lived Fox Family Channel show Ohh Nooo! Mr. Bill Presents (where he presented a number of British comedy skits), in the 1993 short film Mr. Bill Goes To Washington (preceding Ernest Rides Again in theaters and on home video), and in a number of home video releases, like Mr. Bill Goes Hollywood, Mr. Bill Does Vegas, Ohh Nooo!!! It's Mr. Bill's 20th Anniversary, and Ho Ho Noooooo!!! It's Mr Bill's Christmas Special!, along with a few compilation re-releases of his SNL sketches. By the 1990s, Mr. Bill even started appearing occasionally via computer animation.

Most recently he's made appearances on shows like Jeopardy! and Medium, and has done commercials for MasterCard, Ramada Inn, Subway, Burger King, Lexus, and Wonderful Pistachios, and appeared in anti-drug PSAs and even a 2004 campaign to save Walter Williams' home, the wetlands in Louisiana. Williams also created a Spiritual Successor in the form of "The Pizza Head Show", a mid-1990s series of Pizza Hut commercials, the title character of which was more or less Mr. Bill as a slice of pizza (with Steve the pizza cutter in the Sluggo role).

Not to be confused with real men whose surname actually is Bill (yes, there are a few

) Also not to be confused with Bill Murray, who was on SNL concurrently with Mr. Bill.