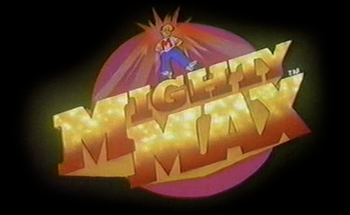 Virgil: Max, my boy. You are earth's only hope!
Max: You know, I knew you were going to say that. Come on man. What about the air force, or the UN? Arnold Schwarzenegger? I mean we don't want to hog all the glory for ourselves...
Advertisement:

Mighty Max is an animated series created by Film Roman. It ran from September, 1993 to December, 1994 in syndication (a total of 40 episodes in two seasons), with later reruns on the USA Network.

The show centers around a smartaleck boy, Max, who is sent an artifact by his archeologist mother, only to find an enchanted baseball cap signifying him as a chosen hero, the "cap bearer" or "mighty one." He comes across two individuals who are also destined to protect and train him, the immortal viking Big Guy Norman provided the muscle and protection while Mr. Exposition Virgil was to be his mentor, who happened to be a humanoid fowl (but certainly not a chicken— indeed, he looked more like an owl). Oh... and that baseball cap is a legendary key to open a series of ancient portals to transport them around the world and even beneath it.

The resident Big Bad was Skullmaster, a dyed-in-the-wool villain powered by the voice of Tim Curry. While Skullmaster formed an overarching storyline involving his desires to Take Over the World, there were plenty of other creatures and stand-alone enemies that encompassed many cultures.

The show was technically Merchandise-Driven, although this aspect wasn't too noticeable. It was also unusual as Max had no real 'powers' to speak of (which begs the question of why there needed to be a chosen one in the first place if any random child could've done it), and its classic monster horror roots meant it never shied away from actually killing people (especially in the final plot arcs) during a time when most cartoons would Never Say "Die" with Virgil even pointing out in one episode "Real violence has real consequences."

On top of everything else, the show technically qualified as educational without being patronizing or boring, thanks to making it distinct and separate from the main show by ending the program using And Knowing Is Half the Battle tags. The show typically worked a given topic into the episode's plot, such as by showing a monster powered by quartz crystals and then explaining quartz's scientific properties afterward.

Not to be confused with Mad Max.

Spike: If you kill me, you'll be no better than me!
Norman: I can live with that. (pushes Spike off a cliff)
Feedback

Example of:
If You Kill Him, You Will Be Just Like Him!