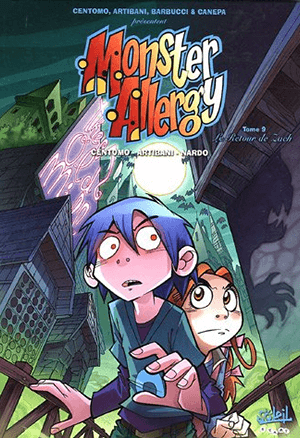 Monster Allergy is an Italian comic book series from the same people as Paperinik New Adventures, Sky Doll and W.I.T.C.H., whose protagonist is Ezekiel Zick, a boy allergic to monsters who lives in a house that is actually a 'taming oasis' for misbehaved monsters, who are invisible to normal people. The monsters actualy live in a suspended city above the town of Bigburg, and they are sent to the taming oases for crimes such as being overly flatulent or playing the violin badly, both big crimes by monster standards. They are supposed to reform under the eye of Tutors, monsters who take the appearance of cats when in the human world, Keepers, humans who can see monsters, and Tamers, monsters that appear human and can command other monsters. Zick's best friend is Elena Potato, a newcomer at the town, and she finds out about the monster world. As the series progresses, Elena gains the ability to see monsters from Zick's mom, a Keeper named Greta.

The original comic ran for 29 issues from October 2003 to January 2006, and, after being picked up by independent publisher Tunué, received a 30th issue (also working as Distant Finale) in November 2015. A sequel titled Monster Allergy Evolution started in November 2016.

The comic has an animated adaptation, co-produced by Futurikon/RAI Fiction/ZDF Germany

and animated by Rainbow SpA. The show was picked up by Kids' WB! in America. Nowadays, the series can be streamed on official YouTube channels in multiple languages, including English

On June 4, 2019, Insight Comics re-released Monster Allergy in Englishnote It was originally published in English by Chuang Yi for the Southeast Asian region, but it is now out of print., making it available for the first time for North American readers.