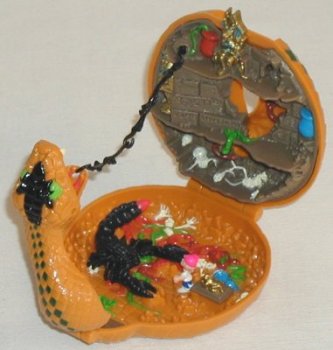 Mighty Max Conquers the Temple of Venom.
Max's Dad left him with his old baseball cap. Trouble was, this was no ordinary baseball cap..."Gotta look the business" Max thought as he tweaked the cap's peak round to the side. "Aaaargh!" Suddenly the world had gone weird and very unfriendly! The cap had changed color! Something very strange was going on! He'd been caught in the Horror Zone. Stumbling from one terrifying adventure to another with only cryptic clues to help him escape...he was all alone. He was scared. But he was MIGHTY MAX, and he'd get back somehow!
Advertisement:

Designed by Chris Wiggs and put into production by Mattel in 1992, Mighty Max was based off the Polly Pocket line of toys. Being marketed more to boys, the genre was shifted away from Polly Pocket's "Slice of Life" style to Action Horror.

There were several different varieties of Mighty Max toys released.

There were also some wristwatch toys and a few McDonalds Happy Meal toys.

Each toy's packaging also had a mini comic strip on the back, about that particular playset's story.

In 1993 the toys were adapted into the Mighty Max cartoon.