Nature Is Not Nice 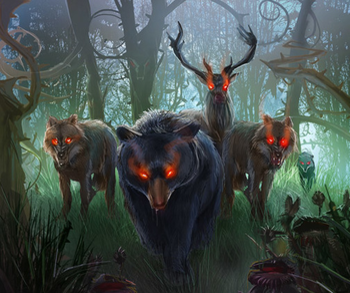 Wolves, bears, and elk? Better run.
"The arrogance of man is thinking nature is in our control... and not the other way around."
— Ishiro Serizawa, Godzilla (2014)
Advertisement:

You've found yourself alone in the woods. No big deal, nature is a perfectly fine place to spend some time, wandering around. But now you can't see the edge of the forest anymore. And you realize that you can't see the sun, either, so you can't tell which direction to go in to get out. Let's add some scary strange noises. Watch yourself randomly running in some direction, looking for a way out, screaming for help, as the sun goes down and afternoon turns into dusk, which turns into a moonless night...

Oh, what's that? You wanted to escape the boredom and corruption of human civilization in the first place, and seek to live in the untamed wild in complete, perfect harmony with nature and its denizens? Don't be surprised when you find that it's a merciless, dog-eat-dog world out there, where disease runs rampant, natural disasters tear through everything in their path, parasites dig into your skin, animals devour each other without the slightest bit of hesitation or regret, and babies are little more than free meals for predators. This is how Mother Nature operates, and if you out there treating her as something out of a Disney movie, she will chew you up and spit you out like the sheltered weakling you are.

Soon you'll learn that Nature Is Not Nice.

This trope comes into play when a work's creator avoids the romanticized, saccharine image of nature as harmonious and maternal by portraying its uglier aspects: the horror, danger, amorality, and ruthlessness of untamed nature that works tend to gloss over. It's prime material for a Rescue show where the rescue team has to find a person lost in the wilderness, or a Nature Hero has that task. Any cute or pretty creature will likely be shown being devoured by fierce predators, or even subvert What Measure Is a Non-Cute? by being shown to be equally ruthless and violent to drive the point home.

The truth is, nature isn't consciously cruel; it just doesn't care about you. The forest is a big scary place in which you can get lost, or killed by disease or wild and ferocious animals. The desert has only about a hundred ways for you to be injured or die. The jungle is even worse. Even a lake or a river is a dangerous place for a person who isn't prepared.

This is also why Appeal to Nature is a Logical Fallacy; just because something is 100% natural doesn't mean it's good for you.

Related to the Naïve Animal Lover, who doesn't realize how brutal wildlife can be. Compare this with Death World. Contrast this with Ghibli Hills, though the tropes are not always incompatible, since nature can be portrayed as beautiful even though it has harsh elements. Inversely related to All-Natural Snake Oil. A supertrope for Nature Is Not a Toy. See Gaia's Vengeance for when nature strikes back in a more dramatic scale.

Don't Talk To Me About Nature

Blu gets rather freaked out seeing a firefly get eaten by a frog followed by a snake eating the frog itself.

Don't Talk To Me About Nature

Blu gets rather freaked out seeing a firefly get eaten by a frog followed by a snake eating the frog itself.