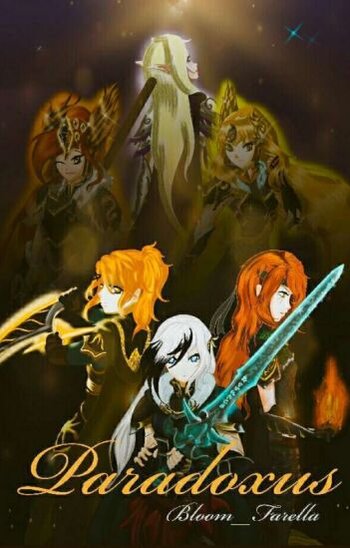 What would happen if the Burning Legion invaded Magix? Well, this fic is the answer and it's not pretty. Azeroth and Magix happen to make an interdimensional contact and, as a result, Magix catches the attention of the wrong kind of people. Isis is turned into Argus 2.0, Solaria's fairies and witches are hunted down because of their light magic, and two of the most powerful fairies to ever exist (Bloom and Stella) are assassinated by the Burning Legion's new Demonic Lady. A war of dimensional proportions ensues, alliances are forged, betrayals run rampant, and the Peggy Sue route seems to be the only option left.

as the official illustrator) is an ongoing Next-Gen Fic that crossovers two franchises that superficially appear mismatching seeing they target different demographics. However, once one digs down enough, striking similarities will be found. To begin with, both World of Warcraft and Winx Club are fantasy with a dash of sci-fi worlds inhabited by magical-wielding people from different races. They are also part of dimensions with several other planets wandering out there and were brought to existence by gigantic deities who disappeared shortly after their creationist sprees — respectively, the Titans and the Great Dragon. And, of course, a twisted version of them: Sargeras and the Shadow Phoenix. Heck, even the concept of a planet/land ravaged by power-hungry, teamed-up forces of evil is common ground. Domino on Winx Club's part and Argus, the Outland, and Silvermoon (to name a few) on World of Warcraft's side. For a more specific example (and exploited by Paradoxus), Daphne, the nymph, has a backstory pretty similar to that of Sylvanas Windrunner: destroyed homeland, cruelly killed by evil seconds in-command, and raised as bodiless spirits to haunt the place.

Alternatively, fairy Magical Girls meet a Crapsack World Role-Playing Game. A Dark Fic in all of its glory.

In a very World of Warcraft fashion, Paradoxus follows a number of parallel plots that interact with each other, branch off, and ultimately converge. Furthermore, it stars an Ensemble Cast made of both canonical and original characters — most of the latter being Fan-Created Offspring. The main trio consists of Stacy (Stella's daughter) and Bloom's two daughters: big sister Daphne Altalunenote  who, from here on, will be called by her middle name in order to avoid mistaking her with her aunt, Daphne, the nymph and little sister Trisha.