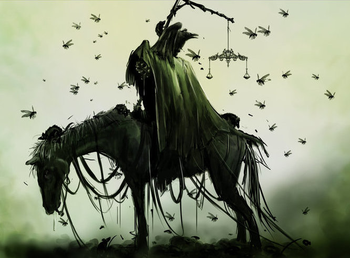 "All things must wither and die. Let root rot and bower blight, to feed the pestilence of abandoned hope."
— Aghalhor the Bringer of Poxes, Warhammer 40,000
Advertisement:

The Plaguemaster is a character who delights in disease and pestilence, gleefully spreading contagions and poxes across the world For the Evulz. Leprous wounds, eyes scabbed over with crusted filth, weeping sores, unburied corpses piling up in the streets — these are a few of their favorite things, and they'll use whatever technological or supernatural talents they possess to bring about The End of the World as We Know It with a hacking, bloody cough.

Typically a Plaguemaster's physical form is just as ravaged by disease as his victims, but due to the character's empathy for illness, they frequently enjoy immunity to the negative effects of the diseases they carry, and may even have supernatural toughness because they're a walking plague ward. The Plaguemaster's obsession is often reflected in his appearance, either bloated with rot and cancerous growths, or wasted and skeletal... but the most insidious Plaguemasters appear perfectly normal, all the better to spread disease without suspicion (or they are Typhoid Marys).

The technologically adept Plaguemasters may use Synthetic Plagues. If the Plaguemaster isn't immune to their diseases, you can expect them to die by becoming infected with their own plague.

Very rarely, characters will have powers of pestilence but lack a real Plaguemaster's interest in using them. But for the most part, any character with plague-related abilities is quite clearly a villain —either of the Card Carrying variety, or a Visionary Villain operating by some twisted Blue-and-Orange Morality that holds all life to have an equal right to thrive, including pathogenic bacteria, fungi and even viruses.

See The Plague or The Virus for what the Plaguemaster spreads. If faced in combat, the Plaguemaster usually deals in Damage Over Time. Their activities are always a great excuse to introduce a Zombie Apocalypse. Sister Trope to Poisonous Person. Compare Typhoid Mary, someone who unwittingly infects people with a disease they themselves are immune to. See Genetic Engineering Is the New Nuke for where the Synthetic Plague is likely to come from.