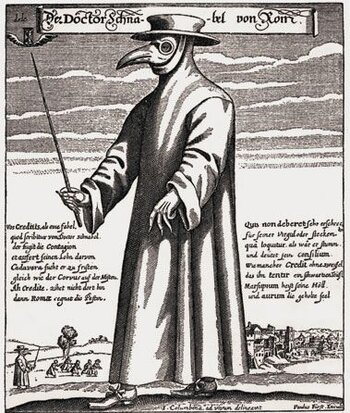 The mask of a bird, for a place where no birds sing.
"As may be seen on picture here,
In Rome the doctors do appear,
When to their patients they are called,
In places by the plague appalled,
Their hats and cloaks, of fashion new,
Are made of oilcloth, dark of hue,
Their caps with glasses are designed,
Their bills with antidotes all lined,
That foulsome air may do no harm,
Nor cause the doctor man alarm,
The staff in hand must serve to show
Their noble trade where'er they go."
— 17th century poem
Advertisement:

An ankle length overcoat, boots, thick gloves, a brim hat and, most importantly, a mask reminiscent of a raven's face, complete with a beak. And now for the story behind it.

A plague doctor is a physician specializing on tending to those who suffered from the bubonic plague. Interestingly, the beak mask itself predates the full head-to-toe protective garment, invented in the fourteenth century. The explanation behind the beak mask is simple: according to the miasma theory of infection

, diseases essentially transfer via the poisonous stench, and the doctors protected themselves from inhaling it by placing various herbs, flowers and other aromatic substances inside the beak. We now know that the miasma theory is false, but the full-body leather costume did a good job protecting doctors from exposure to infection, and the mask blocked airborne infections (especially if the plants contained phytoncides), thus the plague doctor's outfit is essentially a grandfather to our modern mask-and-labcoat medical uniforms; even more so to hazmat suits.

The costume itself was associated with death (where there's plague, commonly known as the black death, there's the beak doctors), which has become deeply ingrained in popular culture. Thus, a plague doctor's outfit is a typical go-to creepy costume, the resemblance to both The Grim Reaper and Creepy Crows doing this effect no harm at all. It is particularly used when the setting has The Black Death or its equivalent featured. Another common interpretation of this trope is to make the Plague Doctor spread plague instead of treating it.note There's probably some Truth in Television to this: the lax hygiene standards of the period meant that the coats they wore were probably washed infrequently at best (and most certainly weren't sterilized to modern standards), and thus some would literally carry the plague, or any other nasty and opportunistic hitchhiker, with them wherever they went. Say, anthrax. Or smallpox. Or measles. Or typhoid. Or salmonella. Or 'flu. Or a complex blend of whatever else mixed in with the Yersinia pestis that'll keep you up at 03:00.

As the costume is particularly associated with Venice (due in part to being a popular Carnevale costume), these guys will often show up in a City of Canals. It's also noteworthy that, due to its creepy appearance, the Plague Doctor's (in)famous bird costume is often a target for the Nightmare Fetishist.

The splitting image of this trope, SCP 049 is obsessed with "curing" an unspecified disease. This "cure" involves death of anyone it touched. Curiously, the plague doctor garb, helmet, and cloak are actually parts of its body.

The splitting image of this trope, SCP 049 is obsessed with "curing" an unspecified disease. This "cure" involves death of anyone it touched. Curiously, the plague doctor garb, helmet, and cloak are actually parts of its body.