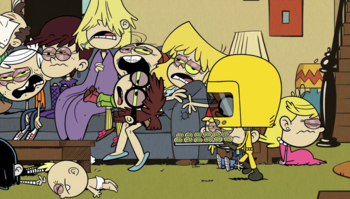 "With 13 Louds packed into 1200 square feet, when someone gets sick, it spreads like the plague."
Violet: Wasn't there a masked ball in Paris when cholera broke out? Half the guests were dead before they left the ballroom.
Robert: Thank you, Mama. That's cheered us up no end.
— Downton Abbey
Advertisement:

It's one thing for a single character in a series to spend an episode in bed with an illness. It's easy to smile at their red nose and whiny demands for soup. However, in a certain time and place, a sick episode can be quite different. Because of poor sanitation and limited medical advancement, or simple unfamiliarity with the strange new world being explored, it's much easier for illness to spread—and for at least one beloved or at least well-liked character, it may prove permanently crippling or even lethal.

This trope most frequently appears in historical or sci-fi settings. In a Period Piece or Costume Drama, The Plague in question will be known by an old-fashioned name that has since been replaced with a more clinical term. The disease is identifiable by an unusually red complexion or an Incurable Cough of Death, followed by a high fever, extreme fatigue, and nightmarish delirium. It will be a disease that has either been completely eradicated in modern times or is easily preventable through vaccines and proper hygiene. The COVID-19 Pandemic has brought a resurgence of some of these story beats to more contemporary series, and they can be downplayed or Played for Laughs in comedic and kid-friendly series. In sci-fi or fantasy settings, the plague may manifest itself with more unusual symptoms, at times a different way in each patient. A few characters may have more up-to-date knowledge of the nature of the disease, but they'll probably need to explain it to other characters who don't.

Once identified, the patients' symptoms worsen steadily until the end of the episode, by which point the plague has abated and everyone is on the mend. The disease is typically already known to at least a few cast members, but they know little about how to avoid it. Because the disease spreads so rapidly, there will be very few people available to care properly for those who fall ill. Expect characters who are well to spend a lot of time tending to characters who are sick, contracting the illness in the process and then spreading it further. Never expect handwashing. Multiple named characters will contract it, and their symptoms can become very severe, but Plot Armor will usually be enough to spare the more central characters. You will most likely hear a doctor remark that a patient will live "if they last the night."

The Plague Episode is a good time for a Love Epiphany or Love Confession, since two characters may be running out of time to clinch their romance. It's also a good time for Last Words that alter a surviving character's destiny. An antagonist struck with the plague may become The Atoner in what may or may not be their final moments.

A Sub-Trope of Sick Episode. Compare Episode of the Dead, in which the plague in question has zombifying effects. If subverted, see Mistaken for Disease.

A whole crowd of people (and animals) catches a cold.

A whole crowd of people (and animals) catches a cold.