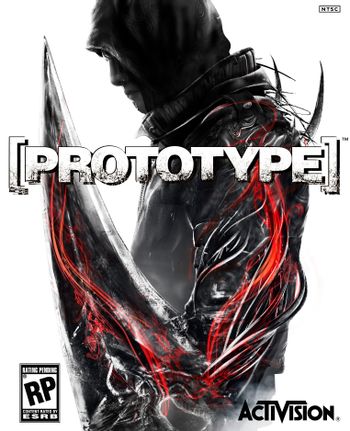 With great power comes great... lunch.
"NOTHING WILL PROTECT YOU FROM ME! NOT MEN! NOT WEAPONS! NOT ARMOR!"
— Alex Mercer
Advertisement:

The Incredible Hulk: Ultimate Destruction meets the T-1000 meets Parasyte. Put inside a blender and made sure it mixes evenly.

Prototype is an open-world action-adventure game developed by Radical Entertainment (not to be confused with Free Radical Design) and released by Activision in June 2009.

The game stars Alex Mercer, a man with no memories and a large chip on his shoulder who wakes up at the morgue as a Voluntary Shapeshifter with the ability to absorb anyone he comes into contact with — assimilating their memories in the process. In his attempts to rediscover his past, he tangles with the shadowy military unit, Blackwatch, the United States Marine Corps, and the growing forces of the Infected, mutants with powers similar to his own, albeit much less human. The game is exceptionally bloody and places no moral restrictions on the player's actions.

Never to be confused with inFAMOUS — believe us, the fans sure don't.

As often seen those days, Prototype spans multiple media. Much like Gears of War and Halo, the backstory of some characters along with some events unseen in the game are explored in the six-parter Prototype comic book published by Wildstorm.

A sequel, [PROTOTYPE 2], was released in April 2012. This page is for the original game Prototype. Please place tropes exhibited in the sequel on the appropriate page.

However, in a method seemingly befitting of the modus operandi of both Alex Mercer and the man who would ultimately bring about his death, James Heller, on July 14th, 2015, with little to no warning at all, Activision and Fun Labs released an Updated Re Release for both PROTOTYPE and [PROTOTYPE 2], the latter of which included all forms of DLC with it, in the form of the Biohazard Bundle for the PlayStation 4 and the Xbox ONE with both games being available separately via digital download.