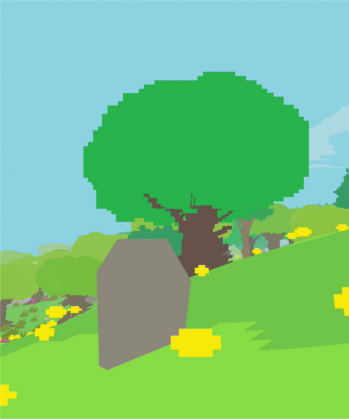 The island beckons.
"Proteus is beautiful, a beautiful thing. And it makes me happy – happy because it is so intrinsically interesting and emotional; happy because we live in an age in which things like this can be made and distributed to everyone with a computer."
— Keith Stuart, The Guardian
Advertisement:

Proteus is an Environmental Narrative Game developed by Twisted Tree and released on January 30, 2013 for PC, PS3, and PS Vita. Primarily intended as an art study, it invites players to explore an unnamed island and marvel in its pixellated visuals and unique soundscapes. Beyond basic movement, there is no interactivity whatsoever and only the reactions of various wildlife implies that the player has any real physical presence in the game world, leading some to question its status as a video game.

Among the unique features of Proteus is the island itself; it is randomly generated from scratch each time the game is played, much like Minecraft, so that you will never visit the same island twice. All sounds are generated naturally by objects in the game - some emanate constantly from the object, others are triggered by actions such as leaves hitting the ground or pigeons running - and consist entirely of old-fashioned synthesizer riffs that mesh with the similarly quaint visuals to create an engrossing atmosphere. No goals are set for the player and the game only ends when it is quit.

There are no buildings or other artificial structures, just nature and you. A day-night cycle and a randomized weather system ensure that the scenery never stays static, and there is even some spectacle to be had in the form of meteor showers. Animals are present, but not in great numbers and exist purely to complete the feeling of exploring a living, breathing island.

Not to be confused with the 1995 horror film of the same name.