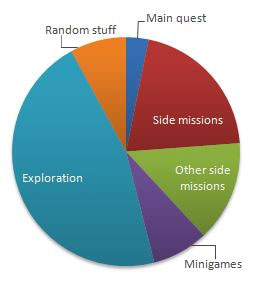 Maybe the main quest is just there to give the whole thing structure.
"A bad sandbox is one where you speed disinterestedly from plot mission to plot mission like The London Underground, but a good sandbox makes you go 'Well, there's the next story mission, but...oooh, collectibles! Oooh, random encounters! Oooh, an intact thing!'"
— Zero Punctuation, inFAMOUS 2 review
Advertisement:

There's no time limit. No restraints, other than the occasional Insurmountable Waist-Height Fence. No compulsory objectives, no requirements. You can do whatever you want, whenever you want. Well, okay, there are goals if you actually want to, you know, finish the game, but why bother when there's so much to do beforehand?

As computer technology evolves, video games gradually move away from the traditional sequential level design towards letting their players loose onto a vast virtual world devoid of designated transition choke-points and loading screens. The terms "open world" and "sandbox" are applied interchangeably to such design, but they are actually two separate aspects of a Wide Open Sandbox that have to be distinguished:

Although these two aspects often go hand in hand, there is a large number of games that have open worlds but no sandbox gameplay (e.g. the Metroidvania game genre). Conversely, there are sandbox games with a wide variety of gameplay systems but little effective freedom of movement (ex: most of the Immersive Sim game genre). Only when the two aspects come together in a single game does it count as a proper Wide Open Sandbox.

The appeal of an open-world sandbox lies in its massive Replay Value potential, as the players are theoretically free to set and pursue their own goals and experiment with various gameplay systems indefinitely. The flip side is that many developers fall (and lead their players) into the Quicksand Box trap, where the sheer wealth of non-linear content, without a driving storyline or a clear overarching goal, results in players losing interest in the game, especially if it doesn't keep track of their objectives and progress. Additionally, player freedom is often difficult to reconcile with a dramatically paced narrative, resulting in underwhelming plots and characterization in many open-world sandbox games.

Historically, open-world sandboxes took many cues from Action-Adventure and role-playing video games, which have traditionally implemented an assortment of subsystems and are often driven by exploration. An RPG player, however, is rarely expected to be Sidetracked by the Gold Saucer, which is the bread-and-butter of sandbox games. MMORPGs and MUDs tend to be designed like this, as well, since they don't have an ending in the usual sense, being sandboxes that expand as new content is added. Traditionally, the "distractions" all involve some kind of combat or another, but newer games in the genre have increasing focus on professions and gear tweaking. Long-runners even end up with multiple main narratives to choose from but as with offline games following this trope, they tend to be relatively weak.

Early role-playing games typically used an open Overworld concept, presented as a Fantasy World Map with the Overworld Not to Scale, such as Ultima. On the other hand, Action-Adventure and Action RPG titles typically use a fully-scaled open world, with Courageous Perseus and Hydlide being the Ur Examples, The Legend of Zelda being the Trope Maker, and Grand Theft Auto being the Trope Codifier.

Not to be confused with the Wiki Sandbox, or software sandboxes

for untrusted code like browser-based Java games, or the OTHER kind of sandboxes. The one with sand. In a box.