Due to the nature of this game's story, this page contains unmarked spoilers for Far Cry 5. You Have Been Warned. 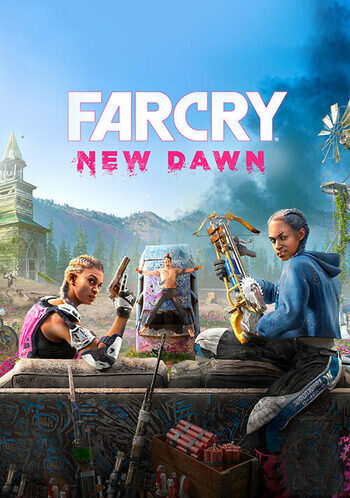 Welcome to the new natural order.
"I led us into the new world. I thought that it would be glorious... I was wrong."
— Joseph Seed
Advertisement:

Far Cry: New Dawn, released on February 15, 2019 for the PlayStation 4, Xbox One, and Microsoft Windows, is the seventh installment in the Far Cry franchise, serving as a direct sequel to the story of Far Cry 5.

Seventeen years have passed since the world erupted into nuclear war. The aftermath was harsh, deadly, and unforgiving - but eventually, the chaos gave way to new life. In Hope County, Montana, survivors began to rebuild, forming a new society in the form of a town called Prosperity. Unfortunately, not everyone shared their ideals. A group of vicious anarchists known as the Highwaymen soon began terrorizing the region, threatening everything that the people of Prosperity had struggled to build.

You take the role of the Captain of Security for a faction of survivors led by Thomas Rush, who has spent the last decade helping survivors rebuild across the west coast. Responding to the locals' cries for help, you arrive in Hope County to find Prosperity on its last legs, all but destroyed by the Highwaymen. To survive this harsh new world, you'll have to gather like-minded survivors, fight back against these psychotic raiders, and rebuild the American way of life...