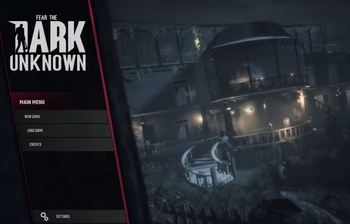 Fear the Dark Unknown is a 3D third-person Survival Horror game with fixed camera angles, developed Dreamlight Games Studios (which consists of two core developers and about 3 to 4 supporting asset makers) and released for PC through Steam on December 2nd, 2019. It is notable for featuring two playable characters with two divergent storylines, and so the game needs to played through twice in order to fully understand the story.

For 200 years, the Beresford Mansion has sat on a cliff a few kilometers outside the town of Barrow. After the death of the Beresford's fourth-of-five daughters, Matilda, there have been rumours of a curse hanging over the estate. These rumours were only reinforced by the misfortunes that befell the family in the following years.

In the present day, James Sullivan and his daughter Chloe have found themselves called to the mansion for reasons unfathomable. There, they will be faced with true terror, and confront a being called "The Dark Unknown".