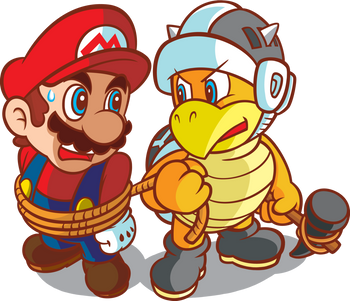 "Sorry Princess, but your Mario is in another castle!"
"Look up there! It's a big, strong man in need of rescue!"
— Rapunzel, Ralph Breaks the Internet
Advertisement:

Meet the Spear Counterpart of the Damsel in Distress. He's usually the sidekick to a butt-kicking Action Girl, always getting himself captured for the female lead to save. This may also occur in shows featuring a male protagonist and even when the male protagonist is a total badass, they tend to get captured quite a bit, usually to demonstrate their awesome escape skills.

Sometimes this trope is regarded as a product of twentieth-century feminism, but it's Older Than They Think. When classifying fairy tales according to the ATU Index

, one distinguishing mark of several types of tales is that a man (or men) is rescued — generally by the heroine. While he is generally her Love Interest, they are generally her brothers.

Compared to the Damsel in Distress, the Distressed Dude is somewhat more likely to save himself in the end or to be saved by someone of the same sex. If he is saved by a woman, she is likely to use her traditional, feminine strengths rather than a more direct approach. When the Distressed Dude is rescued by an Action Girl, it's not uncommon for him (or for another character) to describe this as an injury to his masculinity. If he's in a relationship with the Action Girl, he may be a Useless Boyfriend. This may be Played for Laughs, though sometimes the Distressed Dude will learn An Aesop instead.

The dude may have picked up the Distress Ball. If he was a badass before getting kidnapped, he may suffer Badass Decay, but if he continues to kick ass after being freed, he's a Badass in Distress. Compare Non-Action Guy.

Adventures of the Galaxy Rangers

The Lord of the Rings

Bobby is kidnapped by a Folded Spike and held like their spikeballs.

Bobby is kidnapped by a Folded Spike and held like their spikeballs.