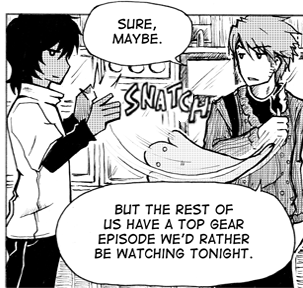 Atty has Richard Hammond at home waiting for him.
Advertisement:

is a witty Affectionate Parody webcomic of the Pokémon Red and Blue games, though it also frequently parodies and references the Pokémon anime, and one of the most popular comics on Smack Jeeves.

It begins the adventure of an unenthusiastic trainer named Atticus Brent being kicked out by his mother for being unwilling to partake in the wonderful world of Pokémon and is forced onto his journey by her. After being given his Charmander ('affectionately' nicknamed Dragonthing) by a worryingly senile Professor Oak, he finds himself slowly sucked into the world of Pokémon. Though he's all too aware that a lot of it doesn't make sense.

This comic has examples of the following tropes: