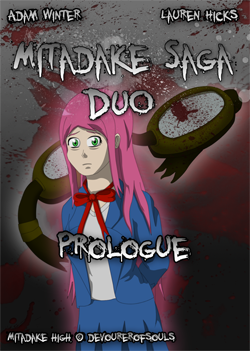 Warning: Dead body located on the premises. Simple program analysis highly suggest either murder or assisted suicide; saving video feed from just before the event. Facility has been locked down until This System's authorities can be reached.
Advertisement:

When a teacher is killed in Mitadake High School, the school's security system automatically places the building on lock-down, preventing anyone from entering or leaving...including the murderer.

Mitadake Saga was a Webcomic hosted on ComicFury. It was based on the Byond game, Mitadake High, by Devourerofsouls, which pays homage to many animé and their stereotypes.There were plans for three overall story arcs

As you can probably work out from the first subtitle, the first arc was related to Death Note. The Byond game has a Death Note mode which replaces the killer with Kira and adds a player who has Shinigami eyes. This arc ended in March 2011.

Duo was to be based on the normal mode of the game. Terminus was a secret. A prequel arc, called Prelude, was planned to go in between Duo and Terminus, but it was cancelled after the creator decided that it'd make the project too long, and was too light-hearted in comparison to the other arcs.

Unfortunately the comic has vanished from the internet and the site it was hosted on has been deliberately excluded from the Internet Archive making this comic most likely not accessible again.