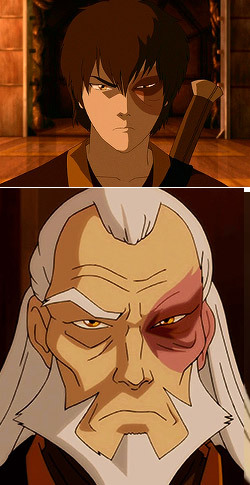 Top: Zuko, age 16. Bottom: Zuko, age 87. Thank his Abusive Dad.
"When does the scar heal?"
"The scar never heals. It's like a medal that nobody can take from you."
"Why does the scar not heal?"
"Because it's a scar, you can't just wash it away. It's scary, but it's a good thing, too."
— Tear Along the Dotted Line
Advertisement:

In Fiction Land, it's easier to come Back from the Dead than it is to get rid of a scar or recover a lost limb.

While it's true that Beauty Is Never Tarnished, and it's a Good Thing You Can Heal means it's highly unlikely for serious injury to happen or leave scars in the first place, there are occasions when a character can't count on that to save them, and they get badly injured in the line of duty. These injuries can be scars, lost limbs, or losing an eye... and the wounds you would expect to see in Real Life aren't reset or retconned away.

Akin to a Traumatic Haircut, but more grisly and more permanent, the injuries serve as a constant reminder of their sacrifice or failure.

A few series have ingenious ways of keeping the character spry after these injuries. Scars always look cool regardless, and Artificial Limbs are awesome, then there's Disability Superpower, or just plain taking a level in badass because Eyepatches are cool!

A few magical series may have the Healing Hands to completely cure or regenerate these wounds, but an author set on hurting their characters can find ways to avoid removing them. A few choose to keep them, or discover the wound is cursed or is too old to heal. Losing the scar can be just as momentous as well; there are wounds that "only love can heal" and will only be healed once an epiphany is reached.

To the Pain usually does not get carried out — but when it does, count on its leaving scars. Similar to Healing Hands, Psychic Surgery never leaves scars.

Truth in Television as when a person is injured, the wounded skin attempts to pull itself back together using collagen (a protein that binds the skin cells together), but for the more severe cases (deep cuts, third-degree burns, etc), the body goes in emergency mode and tends to leave an effective, but very messy and haphazardly done structure — that is the scar. Most if not all scars really are permanent — some are just more visible than others. Real scars will often fade over time, though, so having a scar completely unchanged even decades later is less likely.

See also Death by Origin Story, Every Scar Has a Story, Scar Survey, A Scar to Remember.

Often Achey Scars. Sometimes, too, an indication that the character will suffer Death by Disfigurement, especially if female or Bishōnen. If they are Playing with Fire, chances are likely they'll have some Burn Scars, Burning Powers.