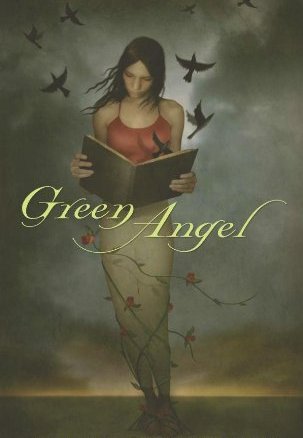 This is how it happened.
Advertisement:

Green Angel is a Young Adult work written in 2003 by Alice Hoffman. It tells the story of Green, a fifteen-year-old who struggles to survive after a fire burns through the city across the river. Her sister Aurora and their parents are among the numerous casualties, and the story is her journey through loss.

Officially, Green Angel is a post-apocalyptic and dystopian tale, with many similarities to the real-life events of September 11, 2001. However, it is also firmly Magical Realism and many events would be impossible in the real world. Stylistically, it verges on prose-poetry and is very brief (128 pages), along with having surprisingly little dialogue. It was followed by a sequel in 2010 called Green Witch.

Green Witch takes place after the events of Green Angel, and the two can be bought as a package in Green Heart. A year after Diamond's departure, Green wonders if she'll ever see him again. Eventually she starts despairing that he's either died or forgotten about her, but she helps the slow rebuilding of the city by growing food, caring for the injured, and writing down people's stories after finishing her own.

Eventually she gets a request from the missing Heather's little brother that he wants Green to help get her back, as she's imprisoned by the Horde. In the photo he gives her, she discovers that Diamond has also been taken prisoner, which cements Green's resolve. She embarks on the quest to find five women (collectively thought of as witches) who might have information about them.