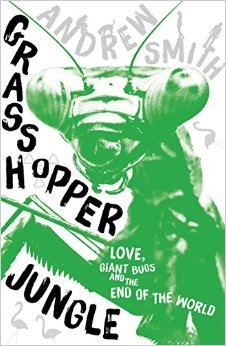 Bugs only want to do two things

"The best books are about everything."
— Austin Szerba

Grasshopper Jungle is a science fiction novel written by Andrew A. Smith in 2014. The story also includes several elements of a Coming of Age story, and focus a great deal on the inner turmoil of the teenage protagonist, Austin Szerba, his relationships with his friends and with his family and cultural heritage.

The story takes place mainly in the fictional city of Ealing, Iowa, a soon-to-be ghost city suffering from economic recession. There lives Austin, a self-proclaimed historian of Polish descent, and his best friend Robby Brees. They inadvertently become responsible for the unleashing of the Contained MI Plague Strain 412E — which, as the title suggests, develops into a serious case of Big Creepy-Crawlies called the Unstoppable Soldiers.