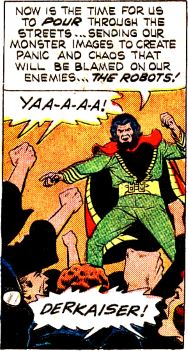 "The old ways are better. Simple. Built to last. Like this submarine. Modern machines... all software, less hardware. You put too much faith in them. Man is the superior machine. And I... am the superior man. I'm told you refuse to talk, and that you welcome pain. I, too, love pain. And I love to make others feel it... using the old ways."
— Anton Ivanov, Agents of S.H.I.E.L.D.
Advertisement:

Science Is Bad? New Technology is Evil? Ludd Was Right? Well, probably not. But don't tell that to these guys.

They're utterly convinced that technology is evil...and so is anyone who uses it. They burn down factories, engage in Fantastic Racism against robots, Cyborgs and Transhumans, call for the execution of people who have had life-saving surgery and lay siege to laboratories. If their motive or justification is religious, they will often overlap with The Fundamentalist. If their motive is environmentalism, then they're almost certainly part of an Eco-Terrorist group. Sometimes they don't really believe in what they're preaching and just want all that shiny, shiny tech for themselves.

Characters like this are generally villains in Science Fiction. In stories with a Nature Hero, they might exist (as the Big Bad or a second villainous faction) to provide a foil. A story where Ludd Was Right might have this accidentally if the protagonist is too much of a Designated Hero. Contrast with the generally peaceful Space Amish. See also Evil Reactionary, who opposes modern changes to society, rather than to technology (naturally, the two may overlap) and Technophobia in which the character can have an aversion for technology, but not to the point of being this trope (but may overlap, too). On the scale of Romanticism Versus Enlightenment, they're the antagonists in Enlightenment works, especially if they're enemies against the Science Hero.

Rolland Dupain is a staunch traditionalist who complains about even the most basic of innovations or changes. When he is turned into Bakerix by Hawk Moth, he intends on acting upon his beliefs with violence.

Rolland Dupain is a staunch traditionalist who complains about even the most basic of innovations or changes. When he is turned into Bakerix by Hawk Moth, he intends on acting upon his beliefs with violence.