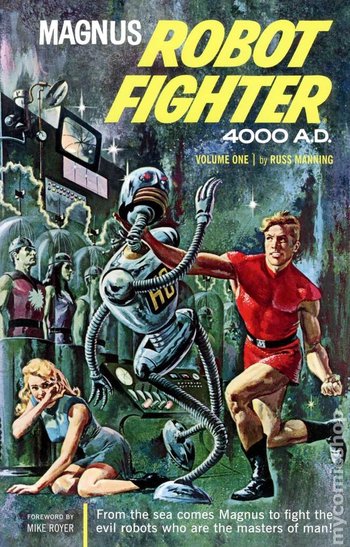 A Silver Age comic book hero created by writer and artist Russ Manning, originally published by Gold Key Comics in the 1960s. He was revived by Valiant Comics in the 1990s, and has appeared sporadically under other publishers' banners since then.

The original full title was Magnus Robot Fighter: 4000 A.D. In the far future, man has grown lazy and decadent, and is dependent on a huge labor force of robots for his wants and needs. The robots are programmed never to harm humans, but an increasing number of rogues are showing signs of rebellion. One robot, named 1A, still loyal to humanity but sufficiently "rogue" to be able to think outside the box, sees that a Robot War is coming and wants to prevent it. He adopts an orphaned child named Magnus and raises him in a secret undersea base, where he educates him and trains him to be the greatest martial artist the world has ever seen—good enough to defeat a standard metal robot with his bare hands, without resorting to any technology at all. 1A then sends Magnus out into the world—specifically, to the continent-spanning city of NorthAm—to both prevent a robot overthrow of humanity, and to encourage humans to stand on their own two feet again without depending on machines for everything.

A third side in the conflict is the "gophs," the humans who live in the squalid slums beneath the "milespires" where the upper classes of humanity live. The human/robot conflict is literally over their heads for the most part, but they will obviously suffer along with everyone else if a robot war comes.

The 90's Valiant series picks up where the original series left off, initially making a great effort to be faithful to the old setting, characters, and art style. The two main differences are a much greater focus on the class conflict between the gophs and the "cloud cloddies" who live on the milespires; and Magnus' grudging realization that the robots who are chafing under slavery have a perfectly legitimate point. So Magnus now has to try and balance the situation to prevent both a race war between man and robot, and also a class war between the upper classes and the gophs.

We also get to see some of the world beyond NorthAm, most notably Japan, home to the hero Rai, who then got his own spin-off comic. Magnus's world is also fully incorporated in the the Valiant universe, crossing over with its other titles either by time travel or by the presence of long-lived characters like Gilad the Eternal Warrior.

So it goes for a while, and then aliens invade. Specifically, alien robots called the Malevs who had appeared in the Silver Age series, but had been a minor plot element there. Here, they arrive, co-opt most of the existing robot population, and conquer the Earth. All of the original plot arcs are overwhelmed by the fight against the alien invaders. While the Malev War certainly has strong fans among the Valiant Comics fanbase, it can also be argued that it drastically derailed the basic premise of the comic. Here we get a Robot War, but ironically, it's one that has little to do with the original human/robot conflict. The war does end, eventually; but not well for Earth's robots.

There was a short-lived reboot series by Louise Simonson when Valiant changed over to Acclaim Comics. Over a decade later, there was another short-lived reboot series from Dark Horse Comics, written by Jim Shooter again, which went for a more modern, cyberpunk aesthetic than the previous Raygun Gothic look. This was followed by a reboot from Dynamite Comics, and then by another reboot from Dynamite focusing on a female Magnus who works as a diplomat/robopsychologist and deals with AI mainly in cyberspace. Meanwhile, Magnus' spin-off character Rai received a reboot in the revived Valiant Comics in 2012, omitting all references to Magnus himself for licensing reasons.