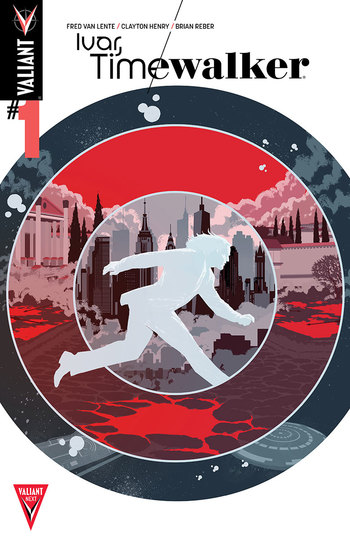 Doctor who?
Come with me if you want to make history.
— Ivar Anni-Padda to Neela Sethi
Advertisement:

Long ago, in the Mesopotamian city-state of Ur, the three Anni-Padda brothers found the mystical Boon, which would grant eternal life, but at a cost. Gilad became the Eternal Warrior, while Aram became a drunk for years and eventually found himself in a partnership with a young man named Archer, but Ivar? Ivar was lost in time. After finally being saved by Archer, Ivar became a master of charting "timearcs," naturally occuring miniature wormholes that allow people to traverse history itself.

Which is what led him to Neela Sethi, a genius theoretical physicist working for CERN and on the brink of inventing time travel. When Ivar shows up, he says that her work will not only put her in danger, but all of time itself. Initially thinking him a madman, Neela refuses to go with him, until they are attacked by the Prometheans, highly advanced fifth-dimensional beings working for Oblivi-1, a giant space station situated at the far, far future.

Needless to say, she begins to believe him. But he may not be telling her the entire truth — about why he showed up or about what her future holds. Because the leader of Oblivi-1 might actually be Neela herself.