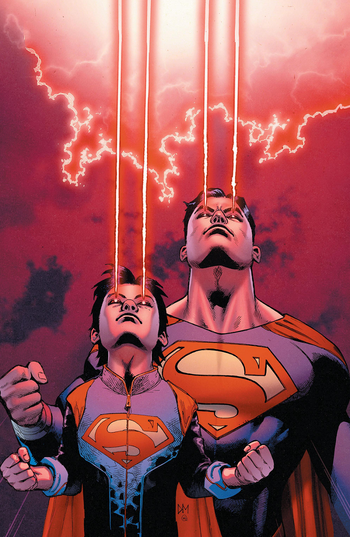 "Awww. He has his father's eyes!"
Cyclops: Jean, I've been wondering — will you marry me?
Jean Grey: Cyclops! Well, if we have children, they'll be mutants. They'll face the same problems we have all our lives.
Cyclops: I wouldn't have it any other way.
— X-Men: The Animated Series, "The Final Decision"
Advertisement:

Having a superhero parent is like being Blessed with Suck. There's the bi-weekly kidnappings, frequent Parental Abandonment, being constantly lied to if your parent has a Secret Identity, being forced to lie to maintain your secret, and constant worry that your parent(s) or you will be killed by a vengeful supervillain. But look! You can fly!

Normally, heredity is a messy affair; it's often described as a game of chance. Thanks to Darwin, Mendel, Watson and Crick, it can be explained a good deal better, but much like A.I. Is a Crapshoot, what traits a child will inherit from each parent are mostly random. Not so with superpowers. Children of "supers" can have a limited number of things happen:

Super-power inheritance tends to happen more often than could be ascribed to chance; a non-powered child of even a hero and a normal person is an exception. Super-powers seem to be "more dominant than dominant" (more common than genetics should allow).

If a parent's powers are caused by gene splicing, or from being born a mutant or part or full alien, then it gets interesting. Specific powers actually have a higher chance of not being inherited. In such cases, the child usually gets a completely different power, or at best one that's only tangentially related. This becomes much likelier if both parents have different powers. Only occasionally will they just have a combination of their parents' powers; this tends to happen if the parents' powers are very simple, or if the series was designed around the child, and the parents were brought in as part of the Back Story as a Secret Legacy. If this happens often enough, it may be revealed that all the powers of that family are just different expressions of the same gene as a Meta Origin.

If only one parent has powers, however, the child's powers are much more likely to be a straight copy of those, though often at a higher level. This may encourage the writers to give that power its own Meta Origin.