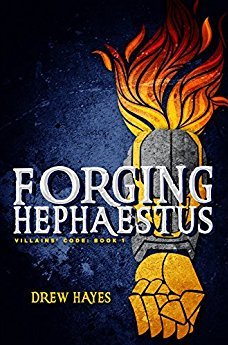 , currently consisting of two novels: Forging Hephaestus (2017) and Bones of the Past (2020). Notably, the series takes place in a different 'verse from the author's Super Powereds setting.
Advertisement:

The story focuses on Tori Rivas, a young aspiring supervillainess (who eventually adopts the moniker Hephaestus) with fire-based powers and a genius-level intellect. She gets an offer she can't refuse from Doctor Mechaniacal to join the Guild of Villainous Reformation, a secret organization, whose purpose is to coordinate, train, and police other villains in order to maintain the tenuous peace with the Alliance of Heroic Champions, a similar organization for superheroes (except the AHC is well-known as respected by the public). Being a Spicy Latina, Tori has trouble fitting in with the standard guild instructors, so Doctor Mechaniacal asks an old friend, Ivan Gerhardt, who in his glory days was known as Fornax, to take Tori on as an apprentice, a practice that has fallen out of style in the modern guild. Ivan alone would determine whether Tori can be trained to be a proper code-abiding villain. If Tori fails, it will be up to Ivan to personally kill her (especially since he's one of the few people who can even touch Tori in her living fire mode).

Not long after Tori's recruitment, an event known as a Confluence occurs, resulting in a number of metahumans appearing in Ridge City. Some are recruited by the guild and some by the "capes". Tori and three other apprentices (Ivan taking Tori on has resulted in the practice coming back into fashion) must complete their training and prove themselves to be true code-abiding villains (being fully aware that the price for breaking the Code is death).

Meanwhile, the country's newest superheroes are likewise trained by the AHC, with two of the recruits being brought under the wing of Apollo, an ambitious superhero with big plans for the AHC, who uses professional image consultants to introduce the new heroes to the world.

Alternative Title(s): Forging Hephaestus, Bones Of The Past