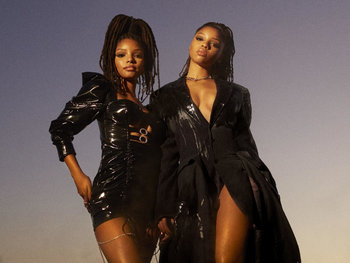 Chloe x Halle is an R&B musical duo consisting of sisters Chloe (born July 1, 1998) and Halle Bailey (born March 27, 2000). Both are self-taught musicians and singers since they were children. After a few minor acting roles and appearances, they caught the attention of pop/R&B superstar Beyoncé with a cover of her song "Pretty Hurts" on their YouTube channel (titled Chloe X Halle). She signed the sisters to her management company, in which their career started in earnest. They have gone on tour with Beyoncé's and received recognition for their singles, mixtapes and first album but it was their critically-acclaimed album Ungodly Hour which led to their breakout into the mainstream.

They are also actors, making appearances in a few films and television series, most notably the series grown•ish (in which they even sing the theme song). In 2019, Halle Bailey was cast as Ariel in The Little Mermaid, Disney's live-action remake of their 1989 animated film of the same name. While Halle filmed the movie, Chloe embarked on solo projects, going by the mononym of Chlöe.

And Halle Bailey is not to be confused with Halle Berry, which many people did when Bailey's Little Mermaid role was announced.

Studio Albums as a Duo

EPs and Mixtapes as a Duo