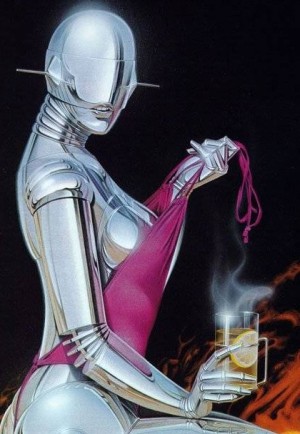 Got nuts and bolts? You'll get a screw.

"Programming the sexbots to enjoy sex seemed a sensible move at the time, but we didn't realize the consequences of their developing fetishes."
— xkcd #595: Android Girlfriend

A robot designed as a sexual toy for human beings. Specifically - not just a robot designed to be capable of having sex if it wants to. Not necessarily a Robotic Spouse.

Frequently, but not always overlaps with Robot Girl or Fembot — see Most Writers Are Male and Author Appeal. More sexual version of Companion Cube.

One of the rare cases where having a Ridiculously Human Robot is actually justified.

A Sub-Trope of Robosexual.

as technology catches up with fiction. The ethical debate evolves along.

And a little later we have this gem:
(Presumably Jewish) Woman: [seemingly considering marriage] Are you circumcised?