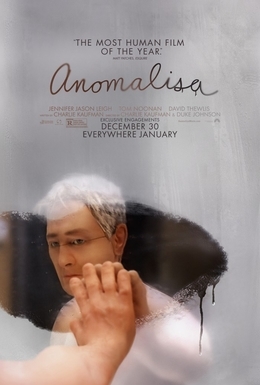 What is it to be human?
Michael: I think you're extraordinary.
Lisa: ...Why?
Michael: I don't know yet. It's just obvious to me that you are.
Advertisement:

Anomalisa is a 2015 animated film using Stop Motion, directed by Charlie Kaufman and Duke Johnson. It stars David Thewlis, Jennifer Jason Leigh, and Tom Noonan. It was released by Paramount Pictures and Starburns Industries, and produced by Dan Harmon and Dino Stamatopoulos.

The film follows Michael Stone (Thewlis), a best-selling self-help author who's in Cincinnati for a customer service conference. We quickly see that he is a very lonely man. Most importantly, he sees and hears everyone around him as the same generic white guy (all voiced by Noonan), even his wife and son. Upon arriving in his hotel, he tries to make a connection with an old flame, whom he insults and causes to storm off. With complete tedium, he suddenly hears a unique female voice belonging to a woman named Lisa (Leigh).

It's also unique in that Starburns Industries wanted to ensure its production outside of the Hollywood studio system, where they believed Executive Meddling would be inevitable, such that the film's budget was partially crowdfunded via Kickstarter. While it was initially pitched as a 40-minute short film, its $200,000 goal was ultimately doubled by backers, allowing for the securing of additional funding and the expansion of the film to a feature.