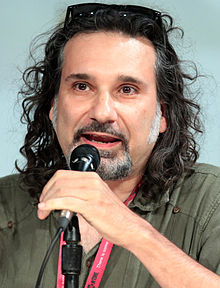 In 2000 began his venture into animation, TV Fun House, a spin off based on a series of Saturday Night Live animated shorts.

In 2005, he created the cult classic, Moral Orel for [adult swim], about a well meaning, pure hearted Christian kid named Orel Puppington who doesn't quite understand the lessons his local preacher teaches. The show, which started out as a dark parody of Leaveit To Beaver, quickly turned into a smart critique about religious authority figures that don't practice what they preach and only use their Christian authority as a source of power in a bible belt town. After the two episode Season 2 finale, Head of Adult Swim Mike Lazzo asked Dino to make the show as dark as humanly possible.

The episode "Alone" was so dark, it got the series cancelled. Instead of 5 seasons with 20 episodes each, Lazzo slashed that down to 13 for the third and final season. Dino would later get a chance to use the characters again in "Beforal Orel: Trust" in 2012 due to the high rerun ratings of Moral Orel, but that would be the last we'd see of the show.

In June of 2010, Dino came back to do another Stop Motion animated series, Mary Shelley's Frankenhole , which had no drama and was more of a Black Comedy like how Moral Orel's earlier seasons were. The show lasted two seasons, with one episode pulled from broadcast due to explicit content.

In 2012, he created his own animation studio 'Starburns Industries'note  Named after his character in Community with Dan Harmon, The studio animated the first two seasons of Rick and Morty, HBO's Animals, and various commercials. That same year, he and Dan Harmon launched a Kickstarter Project to bring one of Charlie Kaufman's audio plays to life, entitled Anomalisa, which was released in 2015 to select theaters by Paramount.

In 2013, he went to Fox for their new 'Animation Domination High Definition' block to create High School U.S.A. with Drawn Together creators Dave Jeser and Matt Silverstein. The show was cancelled after one season, with another episode banned on Fox for extreme explicit sexual content, which briefly saw life on Hulu, then finally premiered on FXX in 2015.

In 2014, he and Leah Tiscione started a Musical Graphic Novel called "Trent: A Light Tragedy with Music", which brought back a bit of the Moral Orel cast back including: Scott Adsit, Jay Johnston, Britta Phillips, and Dino himself. The book itself was released in 2017 under Star Burns Industries Press, where you can purchase it at the Starburns Store