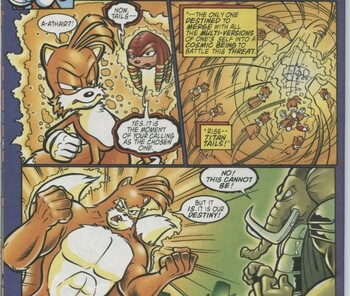 It's time for a clash between titans and masters!
Usually a Fusion Dance is between two or more people who often don't have any connections other than romance or a familial relationship. However, there are instances where characters who are technically the same person merge together. This can involve clones, alternate universe selves, different variations from other timelines, or even someone who has been transformed into a doppelganger of another person.
Advertisement:

How this happens may vary:

Depending on how it is used, this trope can be used to explore anything from loss of identity to achieving a sense of completeness with one self.

Compare Split-Personality Merge, in which multiple personalities within one individual merge into one. This trope can also overlap with Sibling Fusion if the siblings turn out to be one single individual split into two. If the fusion is made up of different timeline variants, this may result in a version of Ripple-Effect-Proof Memory where a character is capable of simultaneously remembering multiple timelines that existed at some point. See also an Alliance of Alternates for alternates of the same person working together as a team. When this is done with multiple timelines or realities, this is called a Merged Reality.