Film / Anger of the Dead 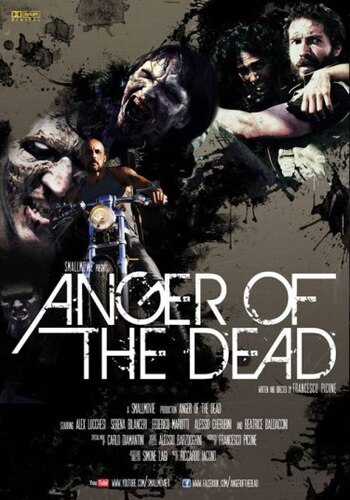 Anger of the Dead is a Canadian/Italian Zombie Movie by Francesco Picone.

Alice (Roberta Sparta) is a mother-to-be in a world that, for the past four months, has been torn apart by the Zombie Apocalypse. With her friends Stephen (Marius Bizau) and Peter (Michael Segal), she's making her way across the country trying to survive. Recently, she's heard on the radio of a ferry leaving for a zombie-free island in three days, and decides to make that their destination.

Meanwhile, a rogue military soldier named Rooker (Aaron Stielstra) has been keeping a woman (Desiree Giorgetti) prisoner for a while, and it has not been a pleasant experience, as she has recently escaped, and is now on the run from him. Soon, these two separate stories shall intersect.

Anger of the Dead contains examples of: