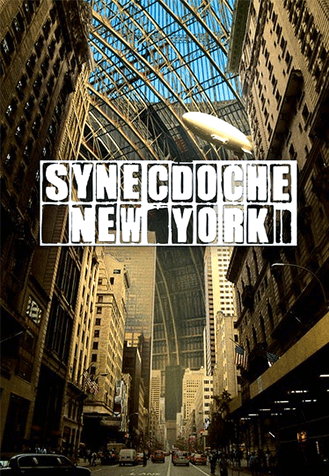 , a struggling theatre director trying to remain optimistic and creative in spite of his marriage collapsing and finding his life is ultimately meaningless.

Following his successful young-cast production of Death of a Salesman, Cotard receives a "genius grant" that gives him a nigh-unlimited budget, which he decides to use on a production that accurately depicts life. Cotard then tries to perfect his artistic vision over the space of several decades, all the while struggling to maintain a relationship with numerous women and come to terms with his mortality.

Especially notable in that the (relatively) basic plotline quickly turns bizarre when Caden hires an actor to play himself, which then extends to the people in his life, too; needless to say, things turn into a mash-up of Meta Fiction, Recursive Reality, Postmodernism and flat out Mind Screw pretty fast. Would you expect any less from a Kaufman movie?