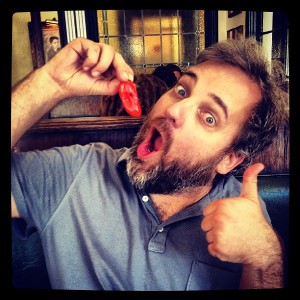 note Storytelling insights from Dan.
"I'm his biggest fan, and I fired him."
— Sarah Silverman
Advertisement:

Daniel James Harmon (born January 3, 1973) is the creator of Channel 101, The Sarah Silverman Program, Community, Rick and Morty, HarmonQuest, Great Minds with Dan Harmon and Heat Vision and Jack. Frequent collaborator of Rob Schrab and master of creating Cult Classics. Showrunner on Community for seasons 1-3 and 5-6 (he was fired before season four).

Interviews with the cast of Community suggest he reads a lot of websites regarding his show. This, combined with the nature of Abed, suggests he's One of Us. He is a confirmed reader of TV Tropes

. Also a confirmed redditor with three

. He also hosts the weekly podcast Harmontown with Jeff Davis.