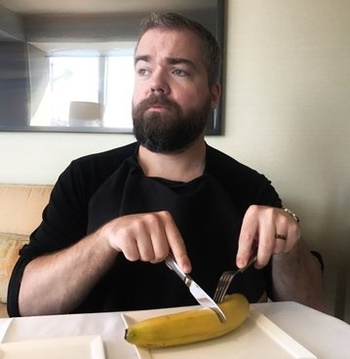 Not an actual smasher of ponies.
Advertisement:

He first started his career working on animated shorts and documentaries in Sweden. The No Budget horror short films he directed and uploaded under the alias "ponysmasher" garnered significant following on YouTube, the second one in particular, Lights Out. That success caught the attention of New Line Cinema's producers, who hired him to direct a feature length version of Lights Out. It came out to great success, grossing near $150 million on a $5 million budget.

Sandberg gained further success with The Conjuring Universe film Annabelle: Creation, which grossed over $300 million on a $15 million budget. In July 2017, he was announced to direct the DC Extended Universe film SHAZAM!, which was released in 2019 to very positive reviews, and he is expected to helm a sequel to it.

He married actress Lotta Losten in 2013. She played in his shorts and appeared in both the short and feature length versions of Lights Out, as well as in SHAZAM!.

Also notably One of Us, considering he mostly started off on Youtube, and he likes to humorously tease about his projects on social media. He's a fan of RedLetterMedia and personally asked Jay Bauman for a review of Lights Out on Twitter. He got that review... but unfortunately, Jay wasn't kind in his assessment. For better or worse, this incident made him an occasional recurring joke on Half in the Bag, though both Mike and Jay clarify they have nothing against him and think he's a nice guy.

Speaking of Youtube, Sandberg is still very active on his channel

, where he provides illuminating insight on the process of theatrical filmmaking and clearing up some common misconceptions about production of major releases.