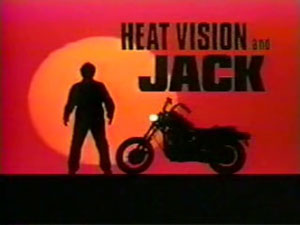 Admit it... you would totally have watched this.
"I... know... EVERYTHING!"
—Jack Austin
"This was a gigantic missed opportunity. If you made a TV show today with Ben Stiller, Owen Wilson and Jack Black, it would cost you $250,000,000 and be about three animated trolls helping a girl reunite her divorced parents at the center of the Earth. And the only way you could get Ron Silver involved would be with an actual Timecop."
—Seanbaby, Cracked
Advertisement:

A notably high quality One-Episode Wonder action-comedy pilot written by Dan Harmon and Rob Schrab, passed on by Fox in 1999, that seems like something that would've been inevitably Screwed by the Network had it been picked up.

It stars a not-quite-famous-yet-but-still-hilarious Jack Black as Jack Austin, a former astronaut that had been exposed to inappropriate levels of solar radiation, and thus becomes super-intelligent whenever the sun is out. Accompanying Jack is his friend Heat Vision, a talking, sentient motorcycle voiced by Owen Wilson, formerly his best friend Doug who was transformed after being hit by a NASA Laser Beam. Pursued by NASA's top agent, Ron Silver (playing himself), who wishes to do experiments on his brain, Jack travels around the country, blocked at every turn... by adventure.

All that exists of it is the pilot episode (labeled Episode 14: The Eyes of Paragon) wherein Heat Vision and Jack face off against a telekinetic, stripper-killing alien broadcast. The pilot was directed by Ben Stiller, who also cameos as the Strip Club's DJ, and whose girlfriend, Christine Taylor, appears as a female sheriff called in by Ron Silver to investigate.

Essentially, it's 22 minutes of action and laughs done by some really funny people. Rumors of a movie surface every now and then, but for now, all we have is the thoughts of what could have been.