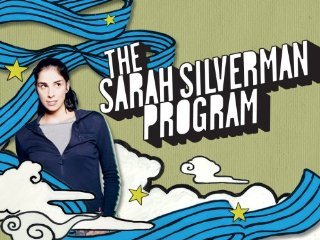 The show's humor is predominantly based on satirizing conventional "family-friendly" or wholesome television programs. The show was originally titled with European English, as "The Sarah Silverman Programme". It was shown on Comedy Central in the United States, for three seasons consisting of six episodes each, then it was canceled.

Comedy Central then decided to bring it back for a third season after Logo decided to co-fund it, apparently only because the show features a Straight Gay couple (who are actually played by straight actors). The show was cancelled again, after Comedy Central seemed to give up on it.

Silverman played a sometimes-sweet often times-jerkass but always oblivious version of herself, similar to her persona from her stand-up routine. She is unemployed and supported by her sister Laura (Laura Silverman), a nurse who is dating a cop named Jay (Jay Johnston). Then there's Brian (Brian Posehn) and Steve (Steve Agee), Sarah's gay neighbors... or "gaybors", as her Nana calls them.