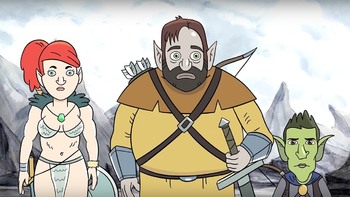 The three regular members of the HarmonQuest adventuring party: Beor O'Shift, Fondue Zubag, and Boneweevil.
"Since the dawn of the 1970's, fantasy role-playing games have provided men and women with an escape from their awkward lives. Today the most awkward of them all, Dan Harmon, is summoning celebrity friends to play these games of old in front of a live studio audience in Hollywood! I am Spencer, the Game Master, and this is HarmonQuest!"
— The Game Master
Advertisement:

HarmonQuest is an Actual Play television series created in 2016 by Dan Harmon. It follows the heroic (or not-so-heroic) deeds of Harmon and a lineup of other comedians and actors (two regulars plus at least one "guest star" per episode) participating in a tabletop fantasy role playing campaign. It is a blend of animation and live-action, semi-improvisational comedy. In-studio portions (filmed before a live audience) showing Harmon and friends and the campaign's Game Master sitting around the gaming table are interspersed with animation showing what their characters are doing within the game world. Think of it as part Saturday morning cartoon (albeit an ultra-violent one) and part Whose Line Is It Anyway?.

The show is a spin-off of the regular role playing sessions in Harmontown.

HarmonQuest was released exclusively on the subscription-based comedy streaming service Seeso, although the first episode is available on YouTube. Due to Seeso closing, the show was moved to VRV for a second season starting in September 2017. The show was renewed for a third season on October 2018, and it premiered on August 18, 2019.